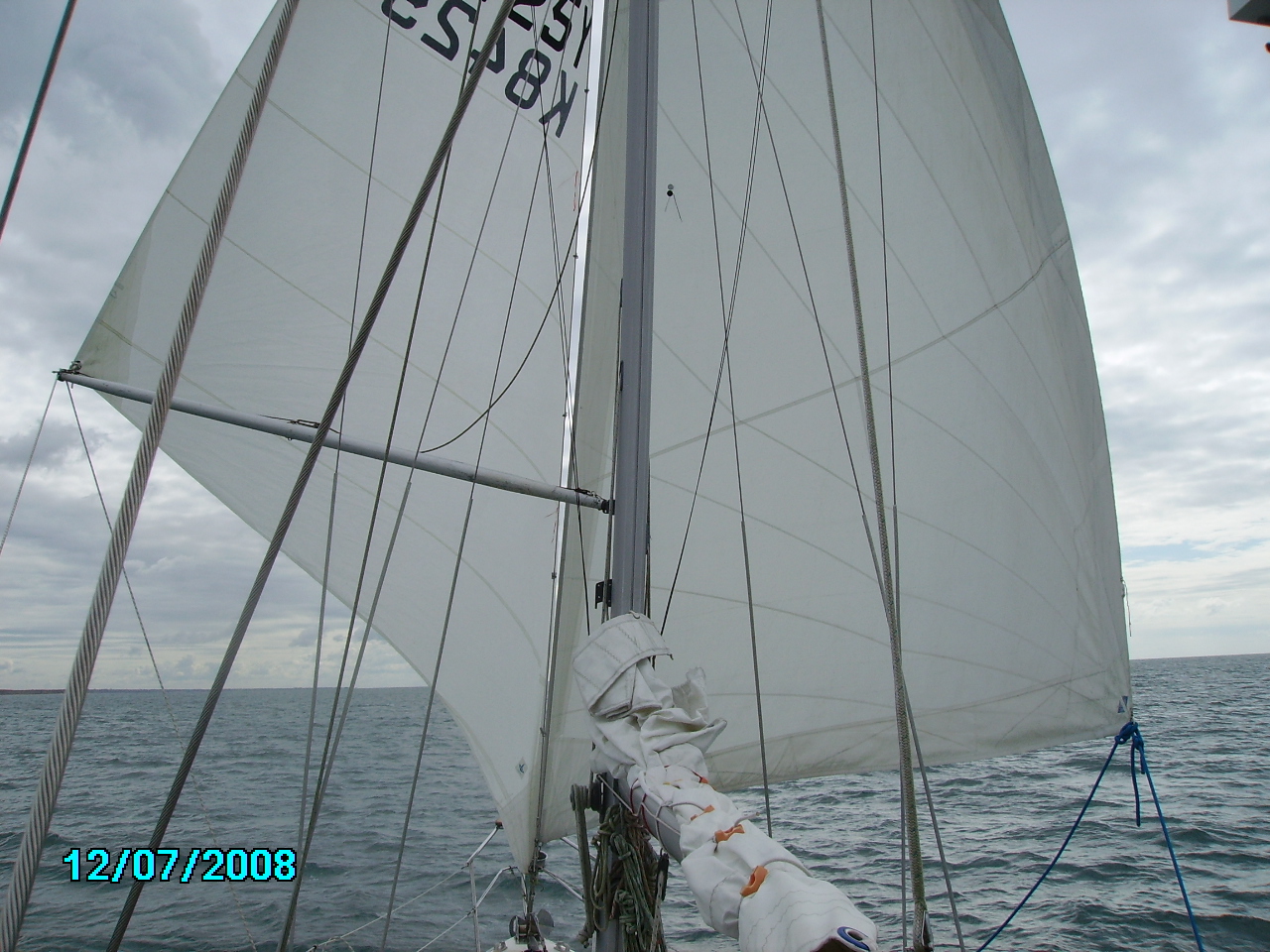 My initial plan was to cross Poole – St PP then head West along French coast and South down the Raz.

After much deliberation and several changes of mind, I decided to do the other half of the square and head West to Salcombe then South to L’Aber Wrac’h.

All started well with an evening beat to Weymouth, getting in at 22:00, and a Chinese take-away.

An early start at 04:00 for Salcombe. It was blowing about WNW F5 going down the East side of Portland so I thought I would be ok with a reef in the Genoa and two reefs in the main. Oh how wrong! Rounding the Bill I had a steady 18 knots gusting 25, so I had the challenge of connecting the inner forestay, hanking on my high cut Yanky and winding in my Genoa, it was a useful experience doing it in those conditions! All was then well doing about 5 to 7 knots and holding course for Start Point.

The mid-day forecast told of loads of wind and rain so I started to debate going into Dartmouth rather than Salcombe, as I would rather spend a wet and windy Saturday on a pontoon in the Dart rather than hanging off a buoy at Salcombe. The decision was made for me, in that the wind died to zilch, so I put the sail away and did a 3 hr motor to Dartmouth.

Lived up to predictions, wet and windy. Dartmouth hadn’t changed in the three or four years since my last visit, except it appeared even more expensive! It was made up for by a nice evening in the Royal Dart YC and a commendation to them for the access to a PC so I could have a look at the weather maps. The isobars were predicted to open out a bit over night Sunday and into Monday, so a Sunday morning start for the 100 odd miles to L’Aber Wrac’h looked to be on the cards.

Set off at 09:30, this time ready rigged for strong winds. The wind was as expected was 18 knots gusting 28 from the SW. I didn’t bother with the Main, I sailed under Yanky and Mizzen doing 5 to 6 knots through the water but the best COG that I could make was 180°. I then realised that my wind generator wasn’t doing its job – zero output. This started the internal debate as to what to do, the engine would have to be run periodically to keep the batteries up and I didn’t think it would like running at my current heeling angle, doing some calculations I reckoned that the 100 miles would be nearer 180 miles with tacks, so to continue (single handed) was not a viable option. One decision made, now whether to return to Dartmouth and sit for best part of a week with a broken Wind Gen and costing me £13 a day + food for the pleasure or to turn back to Poole?

This was a no brainer, at 15:15 I was now 30 miles out from Berry Hd, so I turned down wind for Poole, this would set me 8 miles off Portland Bill and clear of St Albans race.

Oh! how conditions change, I poled out the Yanky, unfurled most of the Genoa and downed the Mizzen. I was flying! 7 to 8 knots over the ground, hardly any roll, I could now sit back and relax. Settled down to a good dinner (pan fried Salmon, boiled Potatoes and Spinach) just before the light went, what a dark Sunday night it was! no ships around, was I the only fool out?

My next challenge was how to reduce speed, de-rig the Yanky and turn onto a reach for Poole. I furled most of the Genoa, and turned South a bit to keep the Yanky filled unsupported. Put the deck light on, clipped on and headed forward to unclip the pole and drop the sail. Got the pole stowed ok and started to drop the Yanky, but realised some of it could end up in the water, I tightened it up on the winch so it now dropped inside the guard rail to which it got tied. I now turned for Poole, let out most of the Genoa and raised the Mizzen.

As dawn broke, I picked up a mooring off Hamworthy and settled down for a sleep to wait for the tide to get me up to Wareham.

Woke about 08:00 and went up the river to my mooring. A nice day, so decided to remove the Wind Gen and take it home to investigate the problem.

PS – I tracked down the Wind Gen problem – one of the diodes in one of the two bridge rectifiers has gone short circuit. Replacement £2.68 + £2.50 p&p, though not from Marlec!